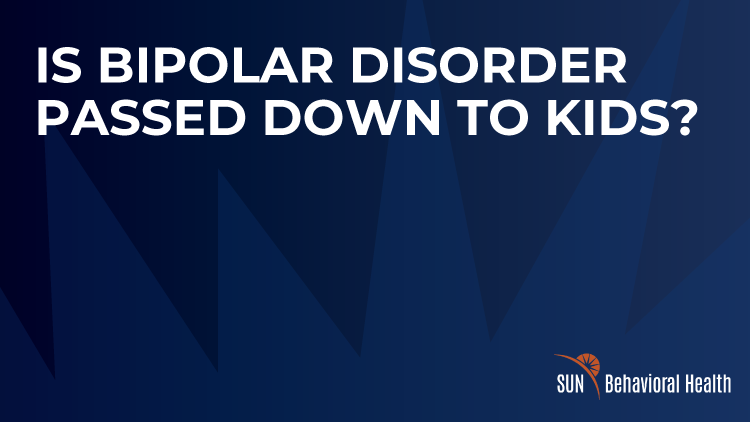 Anyone who has a health condition linked to genetics is concerned about passing it down to their kids. Living with bipolar disorder can be stressful, and it can make day-to-day life more difficult for you than it is for other people. Conversely, if you grew up watching a parent or other relative go through bipolar disorder, you may be concerned that you will develop symptoms. But is bipolar hereditary?

If you or someone you love is living with bipolar disorder, it’s important to know you’re not alone. According to the National Institute of Mental Health, 2.8% of the adult U.S. population suffered from bipolar disorder during the years studied (2001-2003). And mental illness like this is no stranger to the Lone Star State. According to the Texas Health and Human Services Commission, more than 3.3 million Texans suffer from a mental illness.

Bipolar disorder is a mental health condition that causes extreme changes in moods and emotions in affected individuals. Bipolar disorder is not the same as simply suddenly changing your mood or acting on different emotions throughout the day. Bipolar mood swings are extreme swings in emotion that may or may not be related to events in a person’s life. These changes in mood are usually identifiably different from the way a person acts on a typical day, and they likely make it difficult for that person to maintain their usual routine during episodes.

Bipolar disorder sometimes shows up in teens or even children, but people usually do not start showing symptoms until early adulthood, around age 25, when the brain has finished developing. If you are concerned that you may have passed a bipolar disorder on to your child, there is not a specific test or way to know if they may develop bipolar disorder until they begin to experience symptoms. However, people who have bipolar disorder and who have parents with the same condition tend to show symptoms earlier than people who don’t have that genetic relationship.

Some researchers hypothesize that it is the result of chemical disregulation or structural issues in the brain, though no conclusive evidence has been found either way. Most researchers believe it is a confluence of factors related to biology, environment, and life experience. Head over here if you want to learn more about the causes of bipolar disorder.

So, there is a hereditary component to bipolar disorder. However, having a family member, even a parent, who has bipolar disorder does not necessarily mean that someone will have bipolar disorder themselves. Based on the figures stated earlier, if someone has just one parent with bipolar disorder, they have a 70% to 85% chance of not developing it.

Environmental factors can also play a part in the onset of the condition, like extreme stress or traumatic life events. Changes in sleep patterns, hormonal balance, substance use, medication, or significant changes in physical activity can also impact the onset of bipolar disorder.

Stress and environmental factors can be learned from parents, and can even rewire a person’s genetics. A 2010 study from Science Magazine suggests that stress can alter DNA, and that altered DNA can be passed down to future generations.

Injuries and trauma to the brain can also be a factor in bipolar disorder. A head injury or brain damage can cause people to begin developing symptoms, as well as other changes or disruptions in brain function due to illness or other issues. High levels of inflammation in the brain have been linked to bipolar disorder, as well as cortisol levels. Cortisol is a hormone that helps regulate your body's response to stress.

In some cases, these hormonal changes can be inherited from parents. If you have a child and are concerned that some of these factors are impacting them, you may want to discuss your experiences, and help them prepare for potential problems. Conversely, if you are the child of a person with bipolar disorder, you may want to discuss how seasonal changes and hormones impacted their experience with the disorder.

Putting It All Together

When you discover the major factors contributing to your bipolar disorder, there are actions you can take to minimize your symptoms. Many people mistakenly assume that things like chemical imbalances and genetic expression can’t be controlled, but this is not true.

Medication and cognitive behavioral therapy (CBT) can be life-changing for people with bipolar disorder. In CBT, clients learn to identify the emotions that lead to specific behaviors and gain the skills needed to take healthier actions when managing their emotions. Medication, especially in combination with CBT, has been shown to be effective in treating bipolar disorder.

Tactics like meditation and other calming mindfulness techniques are also helpful, as they allow the people who practice those techniques to ground themselves in the moment and create space to think through problems.

If you’re looking to get treatment for bipolar disorder, SUN Behavioral Houston might be a good fit for you. Here at SUN, we understand that every patient is different. That’s why we make sure that your treatment plan is made specifically to meet your needs.

SUN has a treatment program for everyone. We have specialized behavioral health services designed to treat everyone from young children to elderly adults. Our inpatient treatment options help patients who need lots of support recovering from their behavioral health issues, and our telehealth options allow patients to receive care from the comfort of their own homes. There’s also outpatient treatment for those who need in-person care but can’t take too much time away from work and/or family duties. We have something for everyone.

SUN Behavioral Houston is located on the Texas Medical Center campus, which is one of the largest medical campuses in the world.

Are you or a loved one suffering from bipolar disorder? It’s never too late to get started on managing your behavioral health. Find help today by calling (713) 796-2273.

At what age does bipolar start?

According to the National Alliance on Mental Illness, bipolar disorder typically shows up at around age 25, when the brain has finished developing. However, in some cases, it begins earlier.

What is the main cause of bipolar disorder?

Bipolar disorder currently does not have a single known cause. Genetics (traits passed down from generation to generation), environmental stressors, and brain structure and chemistry are all considered to be contributing factors.

What are the four types of bipolar?

The four types of bipolar disorder include bipolar I, bipolar II, cyclothymic disorder, and bipolar “other specified” or “unspecified.”

Does bipolar skip a generation?