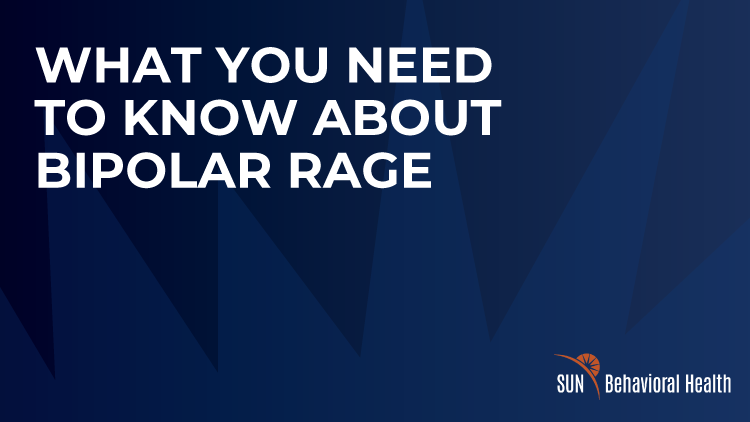 When most people think of bipolar disorder, they think of mood swings. This characteristic presents in those with bipolar disorder, but there is more to the condition than changing mood. For example, some people who struggle with bipolar disorder experience an explosive rage significantly out of proportion to the situation. Maybe they feel the urge to scream obscenities when someone forgets to signal a turn while driving or throw things when there are too many dirty dishes in the sink. This symptom of bipolar disorder is called bipolar rage. In a calm state, a person who experiences bipolar rage understands that their actions are inappropriate for the situation. Still, they struggle to control their outbursts without assistance because of their condition. Luckily, with the proper treatment, those who struggle with bipolar disorder can manage their symptoms and live happy lives.

According to the University of Houston, Bipolar disorder is a mental health condition that causes unusual shifts in mood, sleep, and energy. A person experiencing one of these highs, known as a manic or hypomanic episode, will have increased energy, decreased need for sleep, and may engage in risky behaviors. Conversely, during a depressive episode, a person will often lack the energy and motivation to engage in activities, sleep a lot, and experience feelings of emptiness, loneliness, and guilt. There are four categories of bipolar disorder:

Anger is not officially a symptom of bipolar disorder. Some people with bipolar never experience anger related to their condition. Anger during bipolar happens more often during manic or hypomanic episodes than depressive episodes but can occur during either. During manic and hypomanic episodes, emotions often feel more intense and are therefore difficult to control. A person might experience a slight disruption to their day and have an intense feeling of anger, and that anger could lead to an extreme reaction. It is important to note that during a manic episode, all emotions become heightened. A person is not angry because they are bipolar; their ability to regulate emotions decreases due to their mental health condition.

What To Do During Bipolar Rage

Bipolar rage sounds like a dangerous and hopeless situation, but there are things a person can do to address their anger. If you experience difficulty controlling anger as a result of bipolar disorder you can try:

While there are many things a person can do on their own to manage the effects of bipolar and anger, working with a mental health professional can give you the best chance of finding helpful treatments and techniques to achieve wellness.

When combined with treatments such as CBT, medications are a helpful tool used to treat bipolar disorder. Mood stabilizers create relief from the mood swings present in bipolar disorder. Sometimes antidepressants are prescribed to treat major depressive episodes. Antipsychotics give individuals who experience psychosis during their manic episodes. The combination of evidence-based therapy and medication prescribed by a mental health professional offers patients in treatment for bipolar disorder a chance to find healing and live fulfilling lives.

Suffering From Bipolar Rage? Get Help At SUN Houston Today!

Do people with bipolar have explosive anger?

People with bipolar disorder experience challenging emotions, especially during manic and hypomanic episodes. Some people experience explosive anger during this time, but this is not everyone’s experience. Emotional regulation can be a challenge for people with bipolar, but with the right treatments, they can learn to find success at managing intense anger and other emotions.

How Do You Calm Down Bipolar Rage?

People will have different needs when trying to manage complicated feelings like anger. Some people can calm down with music. Others practice yoga or deep breathing. For many people, identifying triggers helps a person prepare for anger. If you have bipolar disorder or another mental health condition, working with a mental health professional who can help you create a plan for your anger is essential.

How Long Can Bipolar Rage Last?

Bipolar rage is different for everyone. Some people who experience it wake up angry and feel anger for an entire day or even longer. On the other hand, some people have a short, explosive period of anger, feel relief for a few moments, and then feel guilty, which leads to a depressive episode.