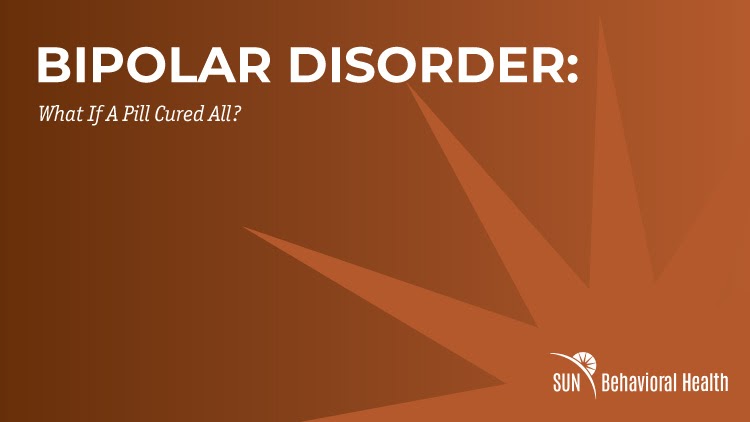 Bipolar Disorder: What If A Pill Cured All?

In 2011, a blockbuster film called “Limitless” hit the silver screen. This movie featured big-name stars and focused on a miracle pill known as NZT. The premise is that NZT allows us to “access all of our brain,” effectively making it a “smart pill.”

The main character starts taking it and finds his whole life is changed as he goes from someone barely keeping it together to a stock market sensation. But, are there really any pills out there that can make such sensational differences in our lives?

Picture this: You take a little pill into your mouth and magically cure whatever ails you. Whether it is a headache or a bad day, or even just a little pick-me-up to finish that big report due next week, can you imagine if you could take one pill and change everything?

If we lived in a sci-fi fantasy world, this would be possible, and treatment for mental health disorders would be much easier. Unfortunately, this is not the case in the real world.
However, for people who suffer from long-term mental health issues like bipolar disorder or depression, there are medications that can often make a huge difference and make someone’s life much more manageable. While these pills are not magical cure-alls, and they don’t “fix” everything, when combined with therapy and care, they can make a major difference.

Bipolar disorder is a mental health condition that was formerly known as manic depression. Someone who has bipolar disorder will go back and forth between feeling extreme highs (mania) and lows (depression). It’s almost like a roller coaster. The dips are the depressive episodes, and the tallest points on the coaster are the manic episodes.

These drastic changes can cause a lot of disruption in the lives of those who have bipolar disorder. Bipolar can affect many aspects of their daily lives, such as sleep, judgment, being able to think clearly and reasonably, and their general behavior.

There are four different types of bipolar disorder, and it’s a lifelong condition that has no cure but can be treated and managed with medication and therapy.

Unfortunately, all medications have side effects, and nearly 75% of people who take lithium for bipolar disorder experience side effects of some sort.

Some of the side effects of lithium include:

Lithium can also be toxic if consumed in excessive amounts. If a person is taking lithium, it’s common for them to get routine blood tests to ensure their lithium levels are not too high.

According to the United States National Library of Medicine, there are three different types of lithium toxicity you should be aware of:

For chronic toxicity, you could have:

There can be much more serious cases of chronic toxicity, with symptoms like kidney failure, memory problems, muscle twitches/hand tremors, lack of coordination of your arms/legs, issues keeping salt in your body, slurred speech, seizures, coma, or psychosis (loss of contact with reality).

Lithium can also have negative effects on how your kidneys function. It’s important to take your dosage of lithium as prescribed by your doctor and never double up on medication if you forget to take it.

If you’re having negative side effects from lithium, it’s best to speak with your doctor to figure out the wisest course of action.

If lithium toxicity has reached a severe stage, it’s considered a medical emergency. If you believe you may be experiencing lithium toxicity, you should seek out emergency services as quickly as possible.

Anticonvulsants were originally meant to be used for treating epilepsy but have proven to help relieve the symptoms of manic episodes along with reducing mood swings.

An example of an anticonvulsant used for stabilizing mood swings is valproic acid (Depakote and Depakene). Valproic acid is a good alternative choice for people who are unable to handle the side effects of lithium.

Side effects typically seen from valproic acid include:

Other anticonvulsants that are used to treat bipolar disorder include carbamazepine, lamotrigine, and topiramate.

Some antidepressants are used in the treatment of bipolar disorder, but only a specific type. A class of antidepressants called selective serotonin reuptake inhibitors (SSRIs) are used for treating bipolar. These should be used cautiously, though, as they are also known to sometimes induce mania or rapid cycling, which is a pattern of frequent shifting between manic and depressive episodes.

Each Medication Has Side Effects

With any medication comes the risk of side effects. It’s really important to be educated about your options and what those risks may be. Some people may be willing to try them, and others may not.

If medication is a path you think you should take, it’s best to seek out a doctor to go through all the pros and cons of each medication to find what is best suited to you and your specific situation.

If you or a loved one is struggling with bipolar disorder, you no longer need to suffer through the manic and depressive episodes alone. The highly trained and caring professionals at SUN Behavioral Houston are here to help you.

Our psychiatrists and master’s level therapists are available 24 hours a day, seven days a week. Call us today at (713) 796-2273 to get the help you need and deserve.

What is the drug most commonly used to treat bipolar disorder?

What is the best mood stabilizer for bipolar?

Lithium is one of the best mood stabilizers for bipolar disorder. But everyone is different, so it’s important to consult with medical professionals to determine what’s best for you.

What drugs treat depression and bipolar disorder most successfully?

What is the safest mood stabilizer?

According to the National Library of Medicine, the safest and most effective mood stabilizer appears to be the combination of an anticonvulsant and lithium, particularly valproate (Depakote) plus lithium.