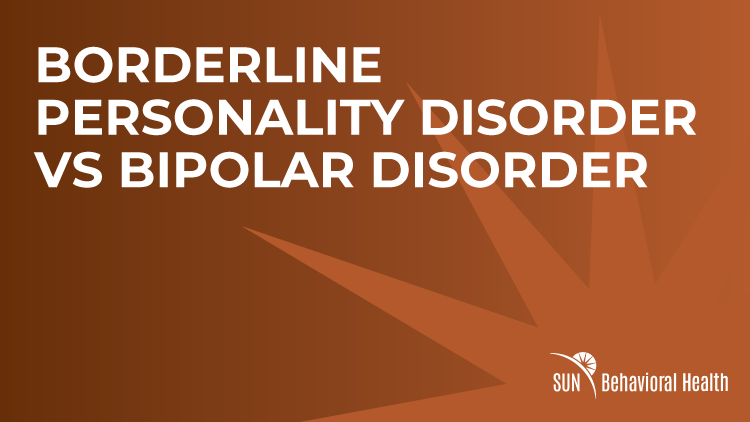 Everyone reacts differently to challenging situations in life, and mood swings are common. However, if your mood swings are so extreme that they are causing you trouble in your daily life, they could be signs of a more serious mental health problem.

According to SAMHSA, it is estimated that 3.68% of Texans have a mental health condition, including bipolar disorder and borderline personality disorder.

To help you determine if you have one of these mental health issues, we'll go through the symptoms of each and some of the differences and similarities between them.

Mood swings in people with borderline personality disorder are more frequent than in those with bipolar disorder. They might shift in hours, not days or months.

Mood swings are usually a reaction to a stressor in one's daily life or are terrified of abandonment, frequently to the point of irrationality. They may develop paranoia, believing that people are attempting to hurt them purposely.

Next, we'll go through how BPD is diagnosed.

The Diagnostic and Statistical Manual, 5th Edition (DMS-5), is the diagnostic criteria for psychological conditions for professionals. To diagnose a borderline personality disorder, it states that there needs to be a pattern of instability in personal relationships, self-image and mood, and impulsiveness.

A person must also exhibit five or more of the following symptoms:

What Are Some of the Symptoms and Characteristics of Borderline Personality Disorder?

A person who has borderline personality disorder will have tumultuous relationships. The way that they think about other people and themselves can be irrational.

They will also display some of these symptoms:

They can use this interpersonal intelligence to navigate personal relationships better if they learn to control their emotions.

However, hypersensitivity to other individuals can often result in mood fluctuations. Any number of unpleasant events or situations may cause someone to feel perpetually triggered.

Bipolar disorder is a mood disorder characterized by intense mood swings. The mood swings range from mania with high energy to depression and low energy states.

Because manic people have a lot of energy and make rash decisions, they may clean the entire house or drain a bank account. Reckless spending is a common manic symptom.

When someone is depressed, they may feel tired and hopeless. As a result, individuals may refuse to leave the house for days, even for crucial tasks like jobs or school.

The mood swings between extreme high and extreme low will sometimes last months at a time. Mood swings affect emotions and behavior, sleep, energy, and sometimes the ability to reason.

A Diagnosis of Bipolar

When a person exhibits an episode of mania and an episode of depression, according to the Diagnostic and Statistical Manual, 5th Edition (DSM-5), bipolar disorder may be the appropriate diagnosis.

Symptoms And Characteristics Of Bipolar Disorder

Some symptoms of a manic episode may include the following:

Some symptoms of a depression state may include:

Differences Between BPD and Bipolar Disorder

There are many differences between the two mental health conditions. Sometimes the two can overlap, and someone could have both BPD and BD.

Some of the differences between the two include:

Similarities Between BPD and Bipolar Disorder

There are some similarities between the two, which is a big reason they often get confused.

Both mental conditions produce extreme emotional responses to stressful situations. They can both involve risqué behaviors and impulsivity.

Some of the similar factors and causes between the two could include brain anomalies.

Some other factors that may lead to the development of either disorder are stressful childhood situations.

When children grow up in a setting where they don't know how people will react regularly, they learn to cope with difficult events by reading others' emotions. They do this to protect themselves from the environment at an early age.

In addition, they learn to adapt to their parents' erratic behavior as a survival strategy. In this way, these mental health conditions can be passed between generations.

Both BD and BPD have some of the same co-occurring mental health conditions.

Suicide is a serious issue with both of these mental health conditions. Thankfully, there are treatment options available for both if you have any suicidal thoughts.

While both conditions are life-long, thankfully, they are both treatable.

Counseling is a way to work on coping skills and thought processes.

We can use some medications to treat bipolar disorder.

Some medications can help you cope with the symptoms of borderline personality disorder, but counseling is the right approach.

SUN Behavioral Houston is here to help if you believe you could benefit from bipolar disorder treatment. We provide cognitive behavioral therapy to assist you in identifying destructive thought patterns and learning to manage and cope with them.

In addition, our master’s level therapists can assist you in determining the motivation for some of your negative thought patterns and re-directing them into positive ones.

We want you to be able to live the life you deserve without mood and energy fluctuation getting in your way.

Treatment may utilize medication in conjunction with CBT to manage your symptoms better.

Beat BPD or BD With SUN

If you or a loved one has bipolar disorder, don't hesitate to get in touch with SUN Behavioral Houston at (713) 796-2273 so that we can help you improve your quality of life now.

What is the main difference between bipolar and borderline personality disorder?

A borderline personality disorder is characterized by mood fluctuations caused by a stress response. They are unable to regulate their emotions effectively and lack a definite self-image.

People with bipolar disorder exhibit mood swings from low to high, but they also have periods of stable mood.

BD responds better to medicine, and it may be a biological issue rather than a psychological one.

Can BPD be mistaken for bipolar?

Both mental conditions can cause intense emotional reactions. Both disorders can have suicidal behaviors, risky behaviors, and impulsivity. More is known about BP, so it is not uncommon for someone to be misdiagnosed.

It is also possible that someone could have both disorders, and, because some symptoms overlap, they may be more severe.